100 posts, 57,000 visitors and counting. Thank you to all of the readers and commenters who make blogging here a joy and good exercise for my brain.

I just finished reading a respectable article on the impact of demographics (baby boom) on interest rates, consumption, and housing prices. The article, published November 2005 by Robert Martin, is available at the US Federal Reserve website.

I won't bore you with the detailed analysis - it is extensive and barely understandable for a layman (including me) - but essentially the outcome of his analysis is that US home prices are affected dramatically by demographics because of the effects on productivity, consumption, and interest rates. The conclusion of the study is that US house prices are due to fall approximately 30% in real terms over the next 50 years.

Will this decline in house prices occur? There are several channels through which the results of the model could give a misleading prediction of future prices. The first and perhaps most unlikely is that the rate of productivity growth in consumption goods picks up sufficiently relative to productivity in housing output to offset the decline in labor input. Second, and more likely, is that the model assumes that agents over the age of 65 have zero productivity. This is an unrealistic assumption. Agents over the age of 65 can work and if they chose to do so in mass numbers then the timing of the downturn might be quite different. I would note that they are most likely not as productive as younger workers and almost every body agrees that at some point they will no longer be productive. Keep in mind, that while 30 percent seems fantastically large, I will show data for Japan in which the model exactly replicates the 34 percent fall in Japanese real house prices over 15 years." (look at the study for further details) 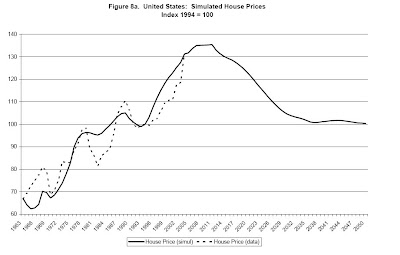 To comment on the study, it is probably the most elegant study on house prices I have ever read. It comes from a respectable source and is not likely influenced by outside interests. It is purely academic but profound in the study model's conclusions.

It was interesting to read something on the housing market that doesn't seem to be motivated by trying to sell books, seminars, or self aggrandizement. I am impressed by this essay and, although it is not 'accessible' to most people, I wholeheartedly agree that we are at the cusp of a major shift in North American society because of the demographic changes set in motion after WW2.

Thanks for the update mohican - I agree about the 'selling' aspect of most reports and studies. Unfortunately it seems like when information is rewritten for mass consumption there's a sales pitch automatically written in.

I've been wondering about that demographic shift as well, its got to have an impact, but certainly some of the predictions so far have been off the mark.

Is another baby boom possible? I doubt it, but just curious. I wonder if we'll see some sort of "immigrant boom". The demographics of the latino population in the US are certainly going to shape that country's future.

It appears that the study accounted for the current US population demographic. I assume this would not include the 'illegal' residents.

Maybe I should go read it, but how does one link productivity with demographic shifts?

To me, productivity is most random walk of them all. Not entirely independent, but pretty close.

"Maybe I should go read it, but how does one link productivity with demographic shifts?"

I think he's making the assumption that as a country's workforce ages, and the proportion of older workers increases, productivity will decrease.

You nailed it casual observer. The study is referring to the decline in a population's productivity as it leaves the workforce.

"I think he's making the assumption that as a country's workforce ages, and the proportion of older workers increases, productivity will decrease. "

So it is totally unrelated labour productivity? Which is measured in average output per worker or per worker hour? Or are they assuming that old geezers who still work don't pull their weight?

To clariy, productivity is the output per worker. GDP measures output. I could see an increasingly retired workforce reducing GDP per capita, and slowing GDP growth. But I don't see how it relates to productivity. That depends on technological advancement as well as levels of infrastructure spending.

Coincidentally or not, I read the same article and wrote about it on my blog here.

These same demographics are likened to the effect of a military attack on the manpower available to work/buy etc in Japan.

I think when death and downsizing finally takes the boomers out of the market as a demographic force in the next 10-20 years, there will definitely be effects.

I can here them already pedaling a "soft landing" theory on boomer divestment in retirement and death.

Two unpredictable global financial policy approaches impacted the accuracy of the model through the 00's.

First, was the reaction of developing nations to the currency and financial crisis of the late 90's. The IMF's 'advice' to these nations in wake of the Thai Baht collapse was to permit their currencies to float. Instead, central banks (in particular China) intervened to keep their currencies low. This enabled spectacular growth in export led industries, made manufactured good cheap in developed nations, and caused central banks to buy buy buy debt issued in developed nations. This in turn has permitted rates to remain low, creating cheap debt in a notionally low inflationary environment (because Nikes and plasma screens are so cheap).

Second was the Fed reaction to the tech collapse / 9-11 by slashing interest rates below the rate of inflation, with obvious effects.

The demand from this artificially stimulative environment is beginning to unwind. The global imbalances also will begin, at some point, to unwind. What will remain is the demographically driven scenario described in the paper, with its implications for the long term value of real estate and other assets inflated by this bubble.