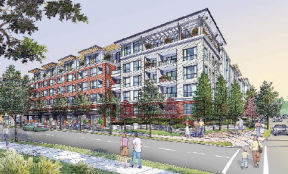 A $600-million development planned for Whalley, described as “the missing piece of the puzzle” will transform the troubled area into an upscale neighbourhood, proponents believe.

For decades, the depressed site around 108 Avenue near King George Highway has been Surrey’s ground zero for drug dealing, prostitution and petty crime. A five-and-a-half acre parcel of vacant property at 108 Avenue and East Whalley Ring Road is overgrown and has often been a site of tent cities of homeless.

Development firm Tien Sher wants to build an 1,100-dwelling community using the vacant property and nearby land occupied by the Flamingo Hotel. CEO Charan Sethi said Monday the 10-acre development will convert the area into the next “Yaletown,” referring to the upscale neighbourhood in Vancouver. The first phases will be four, four-storey apartments with a total of 470 condominiums with ground floor commercial development. In addition, Sethi is planning four high rise apartment buildings just to the west. “We’re in the process of purchasing the Flamingo Hotel and the two properties south of that as well,” Sethi said. “We have firm contracts on all three properties.” Pete Nichols, of Whalley Printers, which is across the road from the proposed development, expects positive change in the area. “It’s going to be fantastic for this end, because it finally frames this area from 108 (Avenue) to 100 Avenue,” Nichols said. “It finally puts north of 104 on the map.” He pointed out other areas of Whalley have benefited from similar developments.

Four 28-storey residential towers at 100 Avenue and a 1,600-unit urban village planned for 102 Avenue and 133 A Street, along with the Central City tower, home to SFU, have begun to transform the south end of Whalley.

All of those projects, including this latest plan, have been partially fuelled by a 2003 reduction in development cost charges, which were dropped by 60 per cent. That incentive expires this June, but city council is considering an extension.

The Tien Sher development is the missing piece of the puzzle, according to Lesley Tannen, executive director for the Whalley Business Improvement Association. “When we’re trying to revitalize the commercial and business sector, what is the one thing that all of those businesses need?” Tannen asked. “They all need more feet through the doors.” She said once that happens, it will create an “ever-increasing and positive upward spiral.”

Mayor Dianne Watts agrees. “It’s a key area within the city centre,” said Watts. “It has typically been a depressed area ... the development will certainly improve that.” Sethi is expecting to break ground on the first phase in May, with completion about 18 months later. “That’s if everything goes well, I just hope our labour shortage doesn’t affect us too much,” Sethi said.

Since Monday’s announcement, Sethi said he’s been inundated with interested buyers.
“The phone is ringing off the hook right now,” he said. “We’re taking registration and sales people will begin making appointments for Saturday.” Studio apartments in the first phase start at $120,000, he said.

The tower portion of the project has to proceed through the city’s public hearing process. - For more information, visit the company’s website at http://www.quattroliving.ca/ or call 604-581-8000.

I think that some of these developments in Whalley will help improve the area quite a bit and I am actually looking forward to seeing more people move into the area. By my estimation there are more than 6000 residential housing units at some stage of development or permitting in the North Surrey area right now, which equates to nearly $2 billion of construction investment. I am just curious as to where all of these people are coming from and where they are getting the money to buy all of these condos.
Posted by mohican at 2/21/2007 04:04:00 PM

I saw this article too,man, them's is a ton of units on the go.

The next Yaletown... hmm, how about the next W? Or whatever they are going to call that neighbourhood. I like "cracktown".

Perhaps I am missing something, but just building condos is unlikely to just "gentrify" an area in and of itself. The condos on Main and Terminal in Vancouver have not exactly turned the surrounding area into a Yuppie community. I doubt the "W" is going to transform the local area into a new Yaletown either.

There is also the implicit assumption that there is actual demand for people to live in this area. Right now, who exactly would want to fork over $120k or more for a bachelor suite condo in Whally?

clarke said: There is also the implicit assumption that there is actual demand for people to live in this area. Right now, who exactly would want to fork over $120k or more for a bachelor suite condo in Whally?

This is the whole point of me posting the article. I just don't see where the demand is going to come from at these prices. I think these developers have an 'if you build it, they will come' mentality, which really has no validity.

Well, I guess it's closer to Vancouver than the Yaletown in Kelowna.

The majority of buyers will be flippers, people who have no intention of actually living there.

Perhaps also all the rich retirees from Dog River will sell and move here.

Use the proceeds of the sale
(all 80k ) as a down payment. The couple could get jobs as security guards
at Gilford. (lots of demand, lots of crime)

No prices can never come down in Vancouver.

OT, I was reading some of the older comments posted on previous threads and I was wondering if there is any way of showing the DATE as well as the time that the comments are posted. I don't really want to post a comment on a thread that is out of date (no recent posts). Just a suggestion. Thanks.

Wow, that was fast. Thank you very much.

With regards to the Whalley development... I wonder how many other municipalities are going to follow Surrey's lead in dropping development fees to spur investment. I didn't see the news report, but I heard one of the newscasters asking why Vancouver wasn't following suit.