Good day,
CMHC released statistics for February 2009 last week and I have finally had a few minutes to look over them and put together some charts. 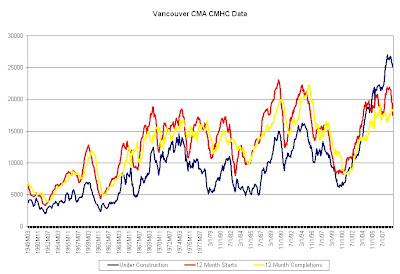 Starts were 701.
Completions were 1241.
Units under construction fell to 25,097. We still have a long way to go down here.
The number of completed yet unsold units is skyrocketing and currently stands at 2391. Contrast that with one year ago at 1384. Despite the best efforts of the developer's marketing firms, new units just ain't sellin'. It could be that they are unaffordable for the average person and that there are very few greater fools left.
Posted by mohican at 3/26/2009 04:20:00 PM

Looks like it's about time for the "12 months of completions" figure to start rising. It was about half a pinkie finger ago that the "under construction" shot up. Now it's Completions' turn.

starts to make you wonder how many speculators are going to default on their pre-sale deals. Anyone get a look at the new macbulk sales? Just like the onni 25% off sale, but with 4 buildings this time. Things are going to start to get messy...

Yes, completions are set to go for the moon in 2009. With starts faltering the number of units under construction will plummet.

The speculators are shaking in their boots right now hoping for a spring rebound. They will mess their pants after it turns out to be a bust.

I'm 23 years old and looking to buy a 1 or 2 bedroom condo somewhere in Vancouver. Kits, South Granville, Downtown, False Creek, maybe even Richmond. I have between $70,000-$100,000 for a down payment. I want to buy, but I by no means have to, I was just wondering what you all thought the best course of action would be considering your bearish (a position I agree with) tone on the real estate market. How long should I wait? Where should I be looking? Any other tips?

Keep up the great work guys, and congrats on lil' Mohican, Mohican!

Chad_MPNP, how long do you plan to stay in your 1 - 2 bedroom condo? You're a young person, so I consider it quite likely that you will plan to 'move-up' in the near future - say five years? I guess you need to ask yourself how you might feel if your equity vanished through falling prices during that time. I consider this quite likely given the current global economic climate. Also, how secure is your job? Can you easily afford the payments on your planned purchase? What if you had to take a pay cut? This spring rally is just that - a spring rally. There is an awful lot of reckoning that needs to take place before we work ourselves out of the current crisis. Keep doing lots of reading. Here's an astounding article from Fish's site to get started: http://www.rollingstone.com/politics/story/26793903/the_big_takeover

I'm still surprised by the snail's pace of completions. In this economy I would assume that developers would be pulling out all the stops, hiring laid off workers at reduced rates to get this stuff completed before more pre-sale buyers try to back out. Woodwards is now back to June/July completion for the first tower and into the fall for the second tower.

The payments won't be a problem as I have a substantial amount of savings (aside from what I have saved up for the mortgage) and I make $5000-$7000 more per month than my payments would be. Having said that, I would not be comfortable losing a substantial amount of my down payment because like I said I don't HAVE TO buy a place. I'd be looking to buy a place to live in for at least 5-10 years but that is just a guess, I do not know where my life will be taking me.

I, too, am relatively young person waiting for right time to buy with sum of cash on my hands.

I will wait at least 1 1/2 - 2 years before I make my move.
It just doesn't make sense to buy now as the prices still has much more room to fall.

You may be tempted by the low mortgage rate being offered by banks now, however, we may have inflation on the horizon in 4-6 years down the road. When it comes, central banks will be under pressure to jack up the interest rates to handle the inflation.
Combine that with falling prices, it doesn't make much sense to buy now.

You are young with no kids I presume?

The way I see it, since renting makes much more sense financially now, I will be renting for quite some time, and save money.
I rather invest in my future then invest in my 'ego' (The whole, renters are suckers who pay their landlord's mortgages argument.)

I'm driving economic car and living under somebody else's basement now
even though I can afford to do otherwise. But I will be much more financially free when I hit 30, 35 because of what I'm doing now.

Good luck with your decision.

You make that much plus mortgage payments at age 23? Maybe we should be asking you for advice. :-)

I think what I'm going to do is start looking at places and put in silly low offers and if anyone is motivated enough to start negotiating at very low prices due to whatever circumstance, then I will seriously consider buying.

Thanks everyone for the advice

I'm shopping for a single family home in the greater Vancouver Area. I've lived and worked on the West Coast for >6 years and have been on the real-estate sidelines for that duration. I’ve had to constantly defend my position/opinion that real estate in the lower mainland has been too expensive for most if not all working residents and that prices simply MUST return to more moderate levels of affordability. Wow, I can't believe how many people tried to convince me real estate in Vancouver was somehow different and/or special. My argument always boiled down to the simple fact that real estate is just another market that goes up and down over time.

I've seen an 18-20% correction (reduction) in housing prices in the last 12 months. It's a buyer’s market and as such an opportunity exists for buyers to negotiate from a position of strength (another 5-10% or even more off list price). The opportunity to enter this market with 20-30% cost reductions is fantastic, special and rare, especially if you are going to live in this home for some time.

If you have been planning (ie, saving money) to make the move into real estate, I am of the opinion/belief that now would be a very good time to start ramping up those efforts. Build a team (brokers/bankers/agents/trades) and take a serious look. There is no urgency at the moment, but remember that when the lemmings rush to the cliff and start buying property en-mass we will be back in the days of bidding wars.

DISCLAIMER: None of my household income is derived from real estate transactions or anything to do with the buying/selling of property (or stocks/$ for that matter). I have not owned a home before and will learn about the associated drama (taxes, repairs, maintenance, and renovations) just as everyone else before me. My eyes are wide open and I am not afraid.

If you have really been looking at real estate for the past 6 years you would know that prices are still far above 2003 levels. If you thought real estate was too expensive then, why would it be a good idea to buy now? Prices easily have another 20-30% to fall in the next couple of years, if not more.
I gotta say i dont buy your whole "i dont earn money off real estate" pitch. If you really think it is a good time to buy you should do a bit more research.

I’m just a guy who wants to buy a home on the lower mainland, like many others reading or posting on this thread. I’m currently hunting to find this home. I don't care if you or anyone else for that matter does not buy my "pitch". BTW, that comment was a disclaimer. I’m a little surprised/confused by your interpretation. Furthermore, I only said I was on the real-estate sidelines for 6 years, not that I had been researching/watching market trends for that long (a big difference).

I agree with you that the real-estate market is currently above 2003 levels. We are closer to 2005/6 levels at the moment. Can it reduce further? Sure it could, but you have to recognise and appreciate the significance of a 30% correction. This correction is real (it has already happened). An additional 20-30% is possible, but is only speculation. I prefer to chart my decisions based on what “is”, not what “might be”. I’m not trying to find the bottom of this market.

I cannot (and will not) argue that an additional 20-30% would look even better from a buyers perspective. The simple truth of the matter is that I plan to buy and live in this property for 10 years (minimum). This is a relatively long timeline, long enough to realize a positive ROI on the initial investment. When I find a property that I like at a price that I can afford I will buy it.

If you have any substantial research to support your prediction “Prices easily have another 20-30% to fall in the next couple of years, if not more” than I invite you to share those details in this thread (or direct us to another blog/thread). There are many people that could benefit from this information, including myself.

"An additional 20-30% is possible, but is only speculation."

Actually quite the opposite. 20-30% is required to REMOVE speculation from the market!

Schnyd, read through past posts on this blog for some data that show why further drops are all but certain. Prices are still too high compared to the incomes they generate. Whether you are willing and able to buy is not the most relevant issue; it's whether the entire market is willing and able to buy at current prices. If they are not prices will fall.

That is good news for you because while you are willing and able to pay current prices, if you wait a few more years you likely won't have to.

Thanks for your patience with me Jesse (and others). I’m a newbee just trying to get my head around the RE monster. I’ll work on tightening/shortening my posts as well. I’m also new to blogging and sense/see ‘less is more’ when it comes to posts in this arena.

I admit I cannot imagine housing prices in more desirable neighbourhoods of the lower mainland approaching the 3X affordability multiples. With the median household income of $60K, even 5X -> 7X seems lean ($300K to $420K). Do you see this happening?