REBGV released their stats package through September 2018. Here are the numbers: 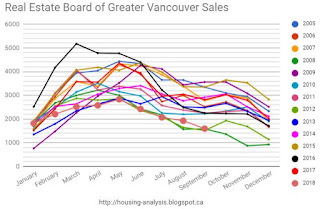 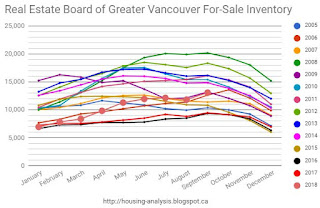 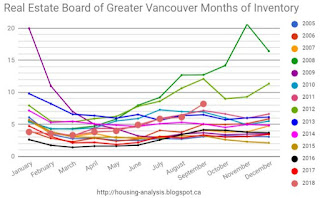 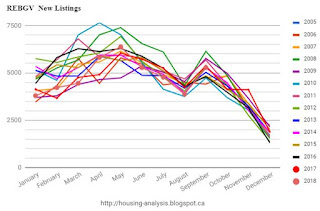 And by popular request, here is the months of inventory and Greater Vancouver composite HPI on a time series graph. The stark increase in MOI and accompanying change in price can be seen. 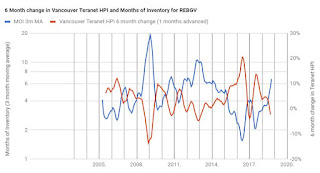 Sales are very weak. Months of inventory has increased to the point where at least a mild price correction is likely. The MLS-HPI is dropping.

The market is very slow. This is on the lower side of my prediction from the beginning of the year; a more significant slowdown after a near-unprecedented run-up in prices in 2015 through mid-2017 was always going to be a possibility. I am now formally on housing correction watch. More housing supply is coming onto the market, remember, and that will help with increasing for-sale inventory in 2019. Corrections do not last forever, but that does not mean there are not some lean times coming. Some people are calling for a substantial correction and some people were anticipating price corrections back in 2014 before prices proceeded to increase another 50%, so for all we know we are very removed indeed from a bottom. I have no evidence to suggest calls for a more substantial correction are fundamentally incorrect, but that does not mean such a call is certain. Nonetheless, I think the next order of business should be to figure out where the bottom is going to be.
Posted by jesse at 10/02/2018 11:06:00 AM

Would love one of your old graphs showing delayed MOI to price change correlations! Been following your site for years. Thanks for the dedication and work you've put into producing this original content. It has been very valuable.

Hi Ryan, sure no problem. Note that this graph is all mohican's idea; I just ran with it, adding a bit more detailed review to get the best fit. I remain truly amazed at how good this correlation is, and remains, after such a varied set of market conditions. I have attached the time series graph here. The scatterplot is in the shop at the moment so I hope this will do!

This data always amazes me too. Two observations for making a prediction:

1. Pricing lows typically occur in December
2. The trend of lower prices is pretty consistent through each Fall.

If you assume, those two hold true for the next few months, we should be near -10% come December.

Hey Dave, yes it is possible that we could see -10% for 6-month changes in December. I don't know how that translates to year-on-year changes, but to get to -10% YOY would need HPI at around 247, and we are currently at 277. To get to -10% on 6-month change would need an HPI of 257. More likely than 247, but still that needs a further drop of 7.2% from current levels. That is certainly well within sighting.

People get all hot and bothered with these year-end slowdowns, and this one is in the range of the 2012 one. Then there is invariably some expectation that the following year will be even worse and people get all giddy with their dream houses growing tantalizingly close and within striking distance of making an offer. That may well be, but it never happened in 2012, and after 2008 there was so much salivation about further drops in 2009 that people missed what turned out to be screaming deals (ex post, obviously). But who could have in all honesty credibly predicted what we have seen since then, other than those who are always on the optimistic side and probably remained so at the beginning of this year?

I don't think there is nearly enough information on past downturns to provide any meaningful predictor of how 2019 will be, other than that we really don't know where the bottom is (price-rent is very high right now), and the world still has a lot of money floating around.

Youre so cool! I dont suppose Ive read anything like this before. So good to find somebody with some original ideas on this subject. realy thank you for starting this up. this website is something that is wanted on the net, someone with just a little originality. useful job for bringing one thing new to the web! casino bonus